Flowers and Bouquets for your Loved Ones in Cove Bay

Anastasia Florists was founded to make it easier to send beautiful, seasonal flowers from a local florist to Cove Bay. Simply enter your Cove Bay, Scotland flower delivery postcode in the box at the top of the page to see all flower bouquets available for delivery in Cove Bay by independent florists. 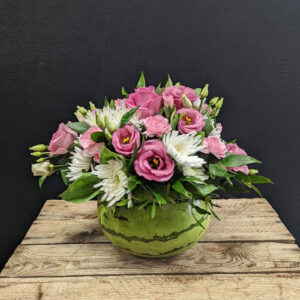 Cove Bay, also known as Cove, is a suburb on the south-east outskirts of Aberdeen, Scotland. Cove now has a population of around 8,000 people. Because of its village-like atmosphere, it is a popular residential area. It is a quiet suburb on Aberdeen’s southern outskirts that won the Silver award for Scotland in Bloom in 2015.

Furthermore, Cove is known for other industries such as granite, which was mined in several locations to the south of the village. Cove granite was one of the hardest in North-east Scotland due to its close-grained texture, and it was highly resistant to frost, making it ideal for causeway stones or cassies used in road construction. It was widely exported to cities in England, including London’s Billingsgate Market. Another industrial claim to fame was a fishmeal factory perched on the edge of precipiced cliffs.

The Aberdeen Fish Meal Factory, which produced first-rate manure and exported it to both Europe and America, was in operation from 1894 to 1937 and became known locally as the stinker due to the strong processing odor. In fact, the late, great Aberdeen entertainer Harry Gordon made it famous – or rather infamous – in a parody titled A Song of Cove. There was also a railway station, which opened in 1850 and closed in 1956.

Though much of the past is gone, some architectural interest can be found on Loirston Road, such as the compact St Mary’s Episcopal Church and the coastguard cottages with their gothic-style windows, which date from 1821. Then there’s the coastline, where the cliffs can be seen in all their rugged glory from the path heading south, as well as the old village tumbling towards the sea. Of course, a visit to the picturesque harbour will also capture the sea in all her majestic moods.

In cove bay floral bouquets are the ideal gift for any occasion – and now, thanks to Anasasia Florists, you can make someone feel extra special with flower deliveries in Cove Bay. Our florist online provides you with the same selection as a flower shop, but from the comfort of your own sofa. Do you want to wish someone a happy birthday or say “I love you” on the spur of the moment? Simply visit our website, and our Cove Bay flower delivery service will take care of the rest. We can even deliver your flowers on the weekend, which is ideal for Mother’s Day or a special surprise birthday gift. It’s never been simpler to select from a fantastic selection of flowers online and send them anywhere, at any time.

After you’ve placed your order for your floral gift, the next step is to ensure that it arrives on time to any address in Cove Bay, when you want it. Anastasia Florists ensures that our flowers delivery service is as good as our bouquet selection! Once you’ve placed your order with us online, our skilled florists in Cove Bay will create your bouquet and ensure it arrives at its destination in perfect condition. Whether it’s a single rose or a bridal bouquet, our flower delivery service is specially designed to ensure that your blooms arrive as fresh as the day they were picked.

It takes years of dedication and skill to become a florist. Our Cove Bay florists have the experience and passion to create beautiful bouquets for any occasion. Our florist online can pick the right blooms for you, whether it’s a simple impulse buy to tell someone you love them or flowers for a wedding, birthday, or anniversary, and our florist delivery service in Cove Bay brings them right to your door or any address you choose. Flowers are our passion at Anastasia Florists, and making our customers happy is our pleasure.

Floral gift baskets and bouquets can also be delivered to Cove Bay the same day or the next day. Our Flower Delivery Service will be offered in the following areas:

What does it mean to place a delivery order?

It’s useful because it allows providers to certify that the delivery went smoothly, and once signed and returned, it serves as proof that all goods were delivered and the recipient was satisfied.

Why is quick delivery important in Cove Bay?

This is a significant departure from standard delivery systems, which can take anywhere from a few weeks to several months. A shorter delivery time could easily increase client satisfaction. Our Cove Bay local flower online shop can provide you with any excellent flower because we can deliver your products as quickly as possible.

Why do customers want same-day delivery?

Why would anyone give a rose or flowers to someone in Cove Bay?

To Show Your Feelings. Why give someone a rose? The rose has long been regarded as a symbol of love. Since the Greeks and Romans, the flower has been used to represent feelings of love and deep emotion. The rose has deep roots throughout human history, owing to the flower’s naturally romantic appearance. Our local Flower online store can provide any flower for you. Now is the time to order and buy.

The red rose is known as the “love flower,” and it represents strong emotions and desires. Red roses are traditionally given to symbolize love, but they are not the only ones. Peonies, sunflowers, and tulips are examples of love flowers that represent happiness, prosperity, and romance. Anastasia Florists can get you any flower you want.